So today I said goodbye to the Seven, two years and one week since it was originally delivered.

I never had firm plans as to whether I would be keeping it forever or selling it at some stage. The original motivation to buy it was the challenge of the build and the satisfaction that gave us. Having the car at the end was a bonus.

We talked about building another, but felt that it would probably not be as much fun as doing the first one as we would know what we were doing. We were pretty proud of the quality of our first attempt,  so did not feel there was much room for improvement (in our standards, anyway).

Although frustrating at first when reflecting back we agreed that solving the problems, or finding workarounds was actually the most rewarding  bit. I fancied trying something that involved more actual fabrication, initiative and personalisation.

I’m not sure where this will lead, but I have started another blog; Team Ivans Cobra….

The car has gone to a good home and I wish Jeff, the new owner as much enjoyment as I got out of the car.

After a few months tucked away under its cover in the insulated & humidified garage the improving weather meant that it was time to get the car ready to go out again. END_OF_DOCUMENT_TOKEN_TO_BE_REPLACED 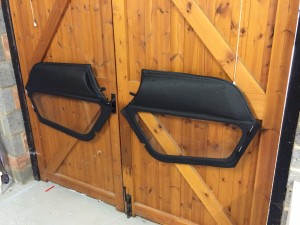 The doors are a bit of a pain to store if you want to go out without them or work on the car. Here is my solution to keeping them out of harm’s way…

Right back when we first painted the garage floor Carl had mentioned that the floor paint may not stand up well to hot, sticky tyres being stood on it. The heat might soften the paint and pull it up when the tyre was next moved. END_OF_DOCUMENT_TOKEN_TO_BE_REPLACED

As the autumn looms my thoughts turned to the time when the car would spend more time in the garage than on the road, I wanted to get a battery charger / conditioner fitted to keep the battery in good shape. END_OF_DOCUMENT_TOKEN_TO_BE_REPLACED

The car went to Caterham Midlands for its first service this week. END_OF_DOCUMENT_TOKEN_TO_BE_REPLACED

I ordered this tunnel bag from Demon Tweeks.

I can’t bring myself to go out without phone or wallet and of course need the house keys. The harnesses are guaranteed to make anything you have in a pocket dig into you uncomfortably so it made sense to have somewhere to stash all the stuff when in the car.

The product seems well made, with metal clips underneath that hook under the tunnel top cover to make sure it stays in place.

I know the purists may choke on their coffee on reading the title of this post, but I wanted to try and find a way of getting a portable sat nav in the car. END_OF_DOCUMENT_TOKEN_TO_BE_REPLACED

The bonnet does seem to chafe against the bodywork, resulting in some small, but unsightly patches of bare aluminium.

I ordered some more self adhesive foam from Caterham and put some additional strips on the underside of the bonnet and on the “shut points” to keep this under control. I also put a couple of bits behind the springs on the front bonnet catches which were also marking the bodywork.

Having run the car for a few weeks here are a few observations.

We have been spoiled by modern, premium cars and  the one thing that the Caterham does not shield you from is NVH (Noise, Vibration & Harshness). You hear everything, which is not bad, just different. You do find yourself wondering is that a gremlin, or just a “characteristic” of  the car.

Having said that it is great to be so close to the mechanics. I don’t think I will tire of seeing the front suspension hard at work over undulating tarmac, or  seeing the front wheels actually turning into a bend. Driving the car doors off is a particularly invigorating and sense-stimulating experience. Just make sure you are wrapped up!

Initially there was a groaning from the NSR of the car, particularly when the car was manoeuvring at low speed. Forums suggested this was the A Frame bushes and should settle down.

The gearbox is noisy on a trailing throttle / under engine braking especially in 4th and 2nd gear. It sounds like gravel shaking on a metal tray.

The brakes squeak horribly, especially at low speed. I need to put some copper slip behind the pads.