Right back when we first painted the garage floor Carl had mentioned that the floor paint may not stand up well to hot, sticky tyres being stood on it. The heat might soften the paint and pull it up when the tyre was next moved.

I wanted a professional looking solution rather than bits of cardboard or carpet tile. At work when we display vehicles indoors at exhibitions we stand them on oval “chequer plate” platforms and I wanted to do something similar.

B & Q sells chequer plate sheet, but it was very expensive. I ended up finding an appropriately named supplier, www.chequerplatedirect online.  I ordered four sheets of 6mm chequer plate 350mm x 260mm. Including VAT and delivery they worked out at around £20 each. They arrived promptly and when I positioned the car on them they looked great.

Initially I did not fix them in place, but found that they moved with the steering or could easily be knocked out of place when the car was off them. I also wanted to get them fixed in position so they would provide a good locator to make sure the car was ideally positioned when in the garage.

To fix them I bought some DeWalt Non-lipped Drop In Anchors from Screwfix (see www.anchors.dewalt.com). These are expandable threaded anchor bolts that you can set into the concrete. I bought 25mm x M6 as they were only going to be preventing the plates moving, not bearing any force. 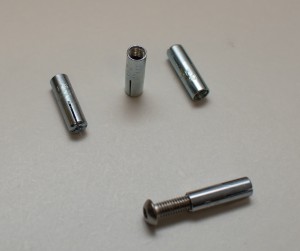 They are like normal sleeve anchors, except the screw or bolt does not provide the force to splay the sides of the anchor out. Instead, once you have drilled a hole, you pop in the anchor and then insert a setting tool, which is basically a centre punch. A few blows from a hammer drives a pin down into the anchor, splaying out the sides to grip the concrete.

I bought some 20mm M6 round head bolts to fix the plates to the anchors. The bolts are round headed and are fixed with an allen key. Having manoeuvred the car into a perfectly aligned position (even going to the trouble of laser rangefinders), we marked the plates’ locations on the floor. We drilled two holes in each plate and then fitted them in place.