We only had one day’s work planned this weekend, but as the missing damper unit bolts had now arrived we were aiming to complete the rear suspension as a minimum. The bolts fitted fine, although we were careful not to cross thread them which was all too easily done according to the manual. The manual then instructs you to measure each side of the De Dion and check it is central. Ours was only 1mm out, well within the tolerance advised.

Before fitting the driveshaft we fixed the flexible braided brake hose to the hole in the chassis rail under the boot floor and attached the other end of the brake line to it. There was no reference to which two plain washers should be used, so we ended up using some of the shim washers from the diff bolt. Using more normal ones prevented enough of the female end of the fixing being exposed to get the nut on the input line fully tight.

Fitting the driveshafts was next and with a coating of grease they slid easily into the differential. What was not clear was how far they should be inserted. Although they had appeared to slot home there was a peculiar gap which made it look like they still had further to go. Taking them out and measuring them soon proved that they could not going any further so that gap remained. What was also quite strange was that there was no gaiter or boot covering the union between driveshaft and differential.

With the driveshaft in place we could now fit the aluminium ears and hubs onto the De Dion. We had already had these fitted when the De Dion had been on the workbench, so the bolts, washers and nuts had already been located. We had also spotted that the manual does not mention fitting the anti-rollbar bracket, nor is it shown in the exploded diagram of the rear suspension. Having installed the offside one we were then able to mount the speed sensor which lined up pretty well with the toothed ring on the driveshaft, further confirming that the latter had been installed correctly.

The rear uprights slide onto the hubs and are held with a 41mm nylon nut, which ultimately needs to be torqued to 270nm! The nearside bolt has a reverse thread, so needs to be tightened anti-clockwise. The final part to fit was the brake calliper, again pretty much complete after the dummy run on the workbench.
The A-frame bolts now needed torquing up to 81nm and then we turned to the final task – fitting the handbrake cables. Once each cable has been routed round and over the driveshaft it loops back on itself and fits into the calliper. It sounded and looked straightforward and judging by the lack of coverage this process gets in almost all the forums and blogs it should not have caused much problem. We could not fathom it out at all though. The cable just did not seem to be long enough to reach the pivot on the calliper. We tried winding the adjuster, but it just seemed to make it worse. As our car was an SV did we have the wrong cable or the wrong handbrake clevis? Either way if we did it would mean a lot of disassembly to change them. We decided to move on to other things and check with Derek.

We therefore moved back to the interior of the car and the carpets. The manual suggests that the transmission tunnel side carpets are glued and set completely before attempting to fit the transmission top cover so we decided to glue these in next so we could fit the cover the following weekend. We did the drivers’ side first taking it in turns to lean in and press the carpet to the inside of the footwell as the fumes from the contact adhesive where overpowering. You could only put your head under the dashboard for a short time. Before fitting the passenger side carpet we needed to plug the large hole giving access to the gearbox with a grommet and you’ve guessed it we couldn’t find the grommet anywhere. So much for having the carpet glued and set for next weekend…

Whilst we waited for the fumes to die down, we switched to the front of the car and the replacement throttle cable. Carl’s trip to Caterham Midlands had uncovered a factory car with the cable routed under the engine cover. It looked like a neat solution and we replicated on our car. The cover is pushed over four small rubber posts with the oil filler cap providing an additional fixing point so it was easy to trap the cable underneath it. 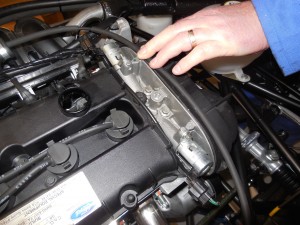 Before fitting the cable to the accelerator we had to perform the legendary “pedal bend” to accommodate the length of the cable. It felt so wrong putting a screwdriver into the top of the pedal braced against a block of wood and bending it by almost 2 inches. However it worked okay and once the cables was attached at both ends we adjusted the pedal stop in the footwell to synchronise with the point at which the throttle body was fully open. 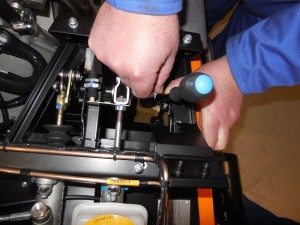 We returned to the cockpit to fit the under-seat carpets. Derek had told us that the factory no longer fits them, but we decided we would and would trim them down to fit in the lowered floor. Once they were cut to size we used the excess to fill the gap under the seatbelt mounts, which made the whole thing look neater. Before gluing the carpets to the floor we market the holes for the seat mounts from underneath the car and drilled (yes, using a wood boring bit) holes thorough the carpet.

Once we had them in we had to do a trial fit of a seat, didn’t we? I know that seat fitting is often described as a frustrating challenge, but the advantage of the non-race seats is that the seat squab is removable giving much easier access to the bolt holes.