Having had a weekend “off” we were both keen to get stuck into what we hoped would be one of the last few build sessions with the car. We didn’t get off to the earliest start due to Carl getting stuck in a monster traffic jam on the M40 and with Six Nations rugby matches providing a tempting distraction in the afternoon we only ended up doing a few hours.

Whilst I was waiting for Carl to arrive I had started to adjust the handbrake cable back to where it should normally be having wound it right out to facilitate fitting the cable ends to the callipers. Once we were both at work we fitted one of the rear wheels to check whether the brake was holding and soon achieved the desired three clicks on the handbrake lever.

We then decided to torque the rear hubs up as much as we could. I had not been able to find a 270Nm torque wrench for hire and to buy one would have cost over £100 and even then would only do the right hand hub as the left hand one was a reverse thread . The biggest one I had would do 210Nm, so we decided to use that and get Caterham to do the rest at the PBC.

The next challenge was how to hold the hubs to prevent them spinning when tightening the hub nut.  I was not sure the hand brake would hold it either. I had read somewhere about using a metal bar with two holes in it mounted onto the wheel studs and then bracing against the ground. It seemed a good idea and for just over a fiver I bought a 1m x 25mm bar. It worked really well and having gauged the strength required to reach 210Nm on the right side I tried to replicate the force on the left.

The next job was to fit the left hand rear wing, which was the same process as we had used to fit the right hand one two weeks before. We did have to “ease” the holes for the wing bolts slightly so that they aligned with the holes in the body side. Once the bolts were tightened up we re-fitted the boot floor, fuel pipe cover and boot carpet. 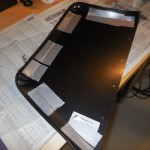 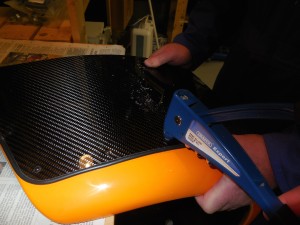 The remaining task in the fibreglass chapter of the manual was to fit the front cycle wings. This had been a job I had been rather apprehensive about as I had decided to go against the manual and use a different method to fit the wings. In addition, fitting the indicator repeaters requires drilling holes in the painted fibreglass which was also quite a scary prospect. My apprehension turned out to be well founded, but more of that later…

The first job is to fit IVA trim around the edge of the wing. We glued ours in place using super glue gel. The indicator repeater is fitted next and the wings are marked with three dots as to where to drill the holes. Comparing the two wings the holes were in noticeably different places, in fact it looked like they had been randomly dotted using a blue marker pen. We wanted our repeaters to be a symmetrical as possible, so we decided to use the marks as a guide, but decide on some measuring datums ourself.

The repeaters are angled and initially it seemed logical to fit them aerodynamically, with the angle facing forward. However looking at the two LEDs inside and judging by the spacing of the marker holes we figured they actually face backwards. We concluded that this means that the indicators flash towards the side and back of the car.

Once we had decided on the location using the rubber gasket as a template, we marked the three holes, covered the area in masking tape to prevent cracking and drilled them with a 5mm bit. Then we used the Dremel to enlarge the middle hole to take the rear of the bulb holder. It all went quite smoothly and we were pleased with the result.

The cable from the repeater goes into and down the front wingstay, emerging from a small hole at the back of the upright. It is then cable tied to the upper wishbone., before going through the wishbone mount hole to join the front light multiplug. In order to pull the cable through we pushed a bit of spare cable up the wing stay first to make getting the cable through the small hole easier.

The official method of mounting the wings involves drilling four holes through the wings into the wingstays and then bolting them on. The downside of this approach is that four screw headed bolts are very visible on the top of the wing. Quite a few builders have therefore used a method using Bighead fasteners. These are small metal plates with u-shaped rings protruding from them. (www.bighead.co.uk).The plates are bonded to the underside of the wings and then cable ties are used to clamp the plate (and hence the wing) to the wingstay. Not only is this fixing method invisible, it also means the wing can be quickly removed and refitted if required.

Two good descriptions of how to fit the wings using this method are on Tom Wood’s (Day 15) and Daniel French’s (Day 24) build blogs. The manufacturer only supplies the fasteners in batches of 100, but I found a number of online sites which offered them in smaller numbers, I ordered mine from East Coast Fibreglass Supplies (http://www.ecfibreglasssupplies.co.uk), along with two tubes of methacrylate based adhesive.

We fitted the front wheel and cable tied two Bigheads to each end of the wingstay. Then we placed the wing over the wheel and used a combination of rulers, spirit levels and eyes to get it lined up the way we wanted. We used tape stuck to the wheels and marker pens on this and the wings themselves to get to a point when we could remove and replace the wing in the same place. Having made a note of the various distances and measuring points so that we could fit the left hand wing in the same position, we applied the adhesive to the Bigheads and fitted the wing one more time. More tape secured the wing in place while the glue set.