The right hand cycle wing had been left to set overnight and when we took off the tape holding it in position we were impressed with the way the Bigheads had bonded. We moved on to the left hand wing and carefully reconstructed the datum points used on the other wing to mark the holes for the repeater. We drilled the three holes, widened the centre hole to 15mm and fitted the repeater. Things were going very well.

Then we noticed it.

We had drilled and mounted the repeater exactly the same as the right hand wing instead of making the mirror image for the other side! How stupid had we been. We had just steamed in and not followed the “measure twice, cut once” rule. There was nothing to be done now apart from put the kettle on and see the funny side. We decided to see how much a replacement wing would cost before looking at any other options with the spoiled one, but that would have to wait until Monday.

We therefore had to move on to the lighting chapter in the manual and fitting the headlight units. It seemed (and was) a long time since we had fitted the headlight bowls and indicators and we had left the light units out so as not to damage them when putting the engine in. We taped the excess length of wires to the inside of the bowls and then re-inserted the sidelight bulb holder.

It was then we discovered that the replacement unit that Derek had sent was not the same and would not fit into the headlight. The prospect of removing the whole light assembly a third time did not bear thinking about so we used a Stanley knife to trim the wrong unit down so that it would fit into the headlight unit. It seemed to fit OK and we declared it good enough!

Rear lights next, which required more drilling into the fibreglass. We lined the unit up using a spirit level and then drilled the four holes into the rear wing.

The light unit is fixed with very basic self tapping screws, which protrude crudely into the underside of the wheel arch. The light cable connects to an econoseal plug and a grommet is fixed int the hole in the wing. One of the light units needed to be reversed on the rubber mounting to make sure the indicator is on the outside. At least we got that bit right!

We then fitted and wired up the number-plate light. This was straightforward, using a crimped bullet connector which fitted perfectly inside one of the existing bullet connectors that came with the unit. Finally we had to put IVA trim around the edges of the fog and reversing light housings.

We removed the light lenses as used our now familiar technique of super glue and insulation tape to hold the trim in place around the curves of the housing. When we came back to fit the lenses though, we discovered that there was not enough room to get them back in with the rubber in place. We therefore had to remove the trim, refit the lenses and then manhandle the trim back between the edge of the housing and the lens. What should have been a quick process actually took the best part of an hour.

Apart from our cock-up with the wing, we were doing well and had plenty of time to start fitting the weather equipment. The first stage was to fit the hoodsticks, having threaded the two straps over them. 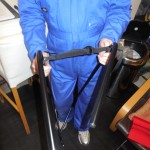 They are secured using two very small screws and once in place, the ends of the straps are screwed into pre-drilled holes on the rear edge of the boot. The distance between the boot edge and the nearest hoodstick must be set to 470mm.

Having fitted the sidescreen hinges to the windscreen surround, we offered up the widescreen and held it in place while we marked the location of the hinge holes. The edge of the sidescreen has a metal strip running through it and we drilled through this with a 5mm bit to allow the hinge bolts to be fitted.

It was good to see that our marking was pretty good as the screen sat quite evenly in the aperture between the hood and the cockpit sides. The screens are held in place in two places inside the car. A strap clips onto a pop fastener riveted to the wheel arch, and the sidescreen armrest clips into the “escutcheon bracket” which is sandwiched between the inner cockpit skin and the sills. We had left five rivets out on each side until we were able to establish exactly where the escutcheon bracket needed to be. Now we had the position marked we are able to insert the final rivets of the cockpit interior.

Although quite fiddly to fit, once the side screens had been fitted the interior of the car was really pretty snug. As a last job of the day we fitted the nosecone so that we could stand back and see the car almost complete.