We decided the first job of the day was to drill the holes in the replacement cycle wing correctly this time!

We measured, marked, checked, compared, checked and checked again before putting drill to fibreglass. Fortunately we got it right this time and soon had the indicator repeater in place. We then decided to bond the Bigheads onto this wing so that we could leave them to cure. We had some debate about the best way to get the wing in the same relative place on either side of the car. We used a spirit level to stick a line of masking tape horizontally across the centre of each wheel and used this plus the floor as datums to measure the eight of the front and rear edges of the wing. This gave us a similar fore aft position. Standing at the rear of the car we judged the side to side location by eye relative to the wheel and tyre.

Once we felt the new wing was in the same position as the right hand one we used more masking tape on the wing and wheel to provide guidelines so that we could re-position the wing in the same spot when we were ready to bond it. Having squeezed adhesive over the back of each fastener, we replaced the wing and taped it in place to let the glue cure.

We then turned back to the other wing and wiring the indicator repeater. I have to confess I find the way these are wired is rather primitive. The earth cable is riveted to the cycle wing and the supply cable runs down through the end of the front wing stay, emerging from a hole near the upright. It is then cable tied along the rear arm of the upper wishbone before going through the wishbone mount hole and meeting the econoseal plug supplying the front headlight.

A number of other builders have fitted removable plugs under the wing and routed the earth cable alongside the supply to get a more sound earth inside the engine bay. I liked this idea as it also means that you can remove the wing if required, just by unplugging the repeated and snipping the bighead ties. However we were not convinced we could get both cables through the wing stay and were concerned that using a self tapper to fix the earth lead would leave a risk of chafing the supply wire inside the stay itself. We therefore opted to fit is as per the manual, but leave a fold supply cable under the wing which would give enough room to lift the wing off if required. 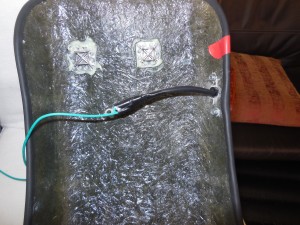 We drilled the hole for the rivet, being careful to file the swarf off the inside of the wing stay to protect the supply cable from damage. Then we used a second length of wire pushed up from the hole near the upright to act as a pull-through for the main supply cable. Caterham Midlands IVA advice is to cover the cable with PVC tube (from the wash / wipe system) as it runs along the wishbone. I did not like the idea of clear tube with green cable running through it, so used some black tubing from a garden irrigation system (Hozelock) instead. We heated the end of the tube and were able to feed it into the hole in the wing stay. Finally we trimmed the insulation off the end of the cable and crimped on the econoseal connector pin before feeding that into the six-way play from the headlights. I remarked to Carl as we cable tied everything ito place that I would be amazed if all the lights work after all this bending, twisting and pulling cables trough the most circuitous of routes.

A change of scene next, we moved back to the hood. We still had to fit a couple of pop fasteners to fix the front lower edge of the hood to the rear arch. It was not going to be possible to fit the popper fronts to the hood with it in place, so we marked the locations and removed the hood to fit them. However, given that re-fitting the hood was a bit of a faff, we decided to fit the boot cover next.

The boot cover uses the same popper bases as the hood on the back and side edges, but needs additional poppers fitted to the top of the bulkhead behind the seats.

There is an aluminium strip of metal in the front edge of the boot cover which has the six holes pre-drilled in it. Unfortunately this strip will not fit if you have harnesses fitted as the harness bolts get in the way. Deferring to the sewing experts (is that sexist?) we had the stitches unpicked, removed the strip and then the hole in the cover stitched back up.

Meanwhile Carl and I had removed the harness bolts and marked where the popper bases were going to go.

Two go either side of the centre line of the car and one is fitted right between each pair of harness mounts. We drilled holes for the bases and secured them with self tapping screws as instructed.

The next hour or so was spent in a routine of putting the cover in place, marking where a popper base was, removing the cover, fitting the popper head and then repeating. We did not want to mark more than one at a time in order to get the most even tension over the cover. Once we had them all completed we came a discussion about how to make the holes for the harness bolts. I had read on a number of build blogs of people having trouble with the boot cover rucking when the harness bolts were being torqued up. I was keen to make the holes as neat as possible so we decided to wait and buy an 11mm hole punch to achieve this.

Apart from completing the boot cover and LH wing, we now had virtually everything completed and the time had come to fill the various fluids and see if the car would start.

We started with the engine oil and the coolant; both a fairly straightforward case of pouring the specified amount of the respective fluid into the reservoirs. We eagerly checked all the coolant system joints for signs of leaks and were relieved that all seemed to be dry.

Filling and bleeding the brakes and clutch system was a new experience for both of us, so having read up on how it was done, we decided to leave it and start afresh the following morning.